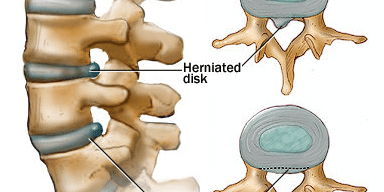 A bulging disc is like a jelly donut, picture in your mind a jelly donut, plump with strawberry filling. Comparing the discs in your back to jelly donuts gives you an idea of what happens when a disc herniates. Have you ever set a box of donuts on your office chair, only to absentmindedly plop down on them a few moments later? What happens? The jelly oozes out under the pressure. When a disc bulges, the same thing happens, except, unlike the jelly donut, a bulging disc can be repaired! That’s were a treatment like VAX-D comes in.

Disc also undergo tremendous amounts of stress. which can sometimes lead to a bulging disc, a weakening of the disc wall that causes the disc to bulge out and press painfully on surrounding nerves. The fluid of the disc, bulge, is typically contained by the rings of the disc ,A bulging disc can also thought to be very common in the over 60-65 age group , some doctors view mild disc bulges as “normal variants”

Bulging discs can also be viewed as the beginning of what is yet to come, or the earliest stages or the beginning of a more serious disc problem. Quite commonly found with degenerative disc disease, patient may or may not have pain. A patient may or may not have leg or radicular pain with a bulging disc. Typically a patient presenting with a disc bulge is presenting in the earliest stage of a disc problem, hence their prognosis is very good in most cases. VAX-D is extremely effective in treating bulging disc, by addressing the structural cause of the compression leading to a bulging disc, effectively pulling the disc material back in place, reducing the inflammation, and taking any pressure off an inflamed nerve, also allowing fluid and oxygen back into the compressed, starved disc, restoring height, and taking the pain away.